Home
Products
About Us
Factory Tour
Quality Control
Contact Us

10years nice cooperation by reasonable price,stable quality and patient attitude to deal with all related work,we are not only partners but also friends with H-LIN Team.

H-LIN is professional,responsible,efficient in our business cooperation.We are very glad to work with those excellent ladies, looking forward to the long partnership with them.

We are very satisfied with H-LIN,they can provide fiber materials which all meets our requirements.They are doing a good job.

1X4CWDM (Coarse Wavelength Division Multiplexing) is one of the four channel coarse wavelength division multiplexers in multichannel wavelength division multiplexers. The four channel CWDM has a common terminal (Common) and four output terminals. The wavelength of the four output ends can be customized according to the actual needs of the customer. It is selected from each interval of 20nm in the bandwidth window of the 1270~1610nm, and a total of four of the 18 wavelengths can be selected. The company has its own broadband light source, so it can test any wavelength in 1270~1610nm. The four channel coarse wavelength division multiplexer usually uses ABS box package, and the CWDM device is encapsulated in the ABS black box. The way of out fiber can be 0.9mm loose casing, 2.0mm loose casing and 3.0mm loose casing, which is custom-made by the customer. The three way of fiber discharge is to wear the corresponding wavelength mark ring on each optical cable for use. Of course, if CWDM adds a connector, this is also entirely specified by the customer. Compared with DWDM devices, CWDM has the characteristics of low cost, low power consumption, small volume and flexible networking mode, which makes the CWDM system widely used. We can provide a variety of custom-made CWDM. The devices of our company have been tested at a minimum of 24 hours and low temperature cycles and the corresponding drop test. The products meet the GR-1221-CORE and GR-1209-CORE related specifications, and the product has a very good stability.

All parameters aboved are for CWDM only,without connectors.

Other wavelength can be customerzied 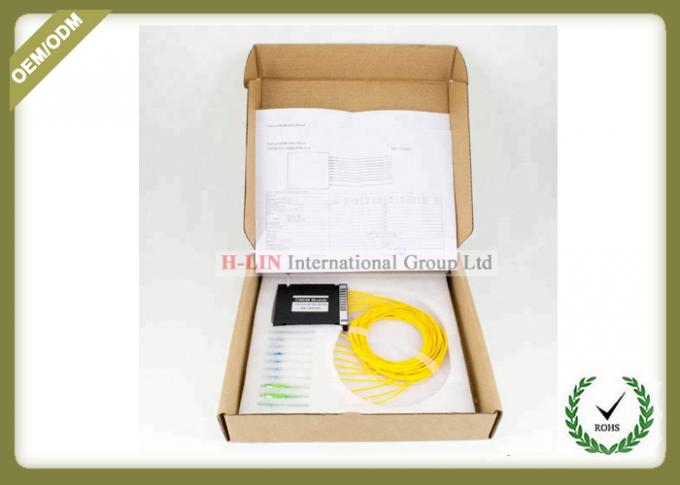